Alien wavelengths are commonplace today. Here a transponder pair from one optical system vendor connects to, and transmits over, the optical line system (OLS) – constituting fixed/reconfigurable multiplexer and amplification elements primarily – from another vendor. (While it can be technically feasible to pair transponders from different vendors, typically this is not done for commercial and operational reasons.)

The initial driver for alien wavelengths was to facilitate changing optical system vendors. It made it easier to migrate existing wavelengths from the previous vendor to the new one over a period of time. Nowadays, an additional driver is disaggregation. Network operators can pursue best-in-class transponders from multiple vendors, and promote price competition, based on their needs for particular applications.

Multiple alien wavelengths can exist on an OLS, each is assigned to distinct multiplexer port with a specified bandwidth. With ECI’s Apollo optical transport system, provisioning an alien wavelength is as easy as 1-2-3 (see below). Once provisioned, alien wavelengths have access to the same system benefits as native Apollo wavelengths, including optical performance monitoring, and accessibility to automated protection switching and WSON restoration.

There is no concern that alien wavelengths will disrupt the optical transport system. The multiplexer port filters constrain them to their specified center frequencies and bandwidth, to prevent accidental overlap with other wavelengths.  In addition, the OLS monitors and attenuates their power levels, as part of its task to optimize transmission for all wavelengths.

Shared spectrum (also known as alien spectrum) is the new kid on the block, which extends the concept of alien wavelengths. Here a primary network operator, who owns and operates an optical transport system, leases a band of optical spectrum to an end-customer to use as they wish. Typically, this would be to an enterprise that runs its own network, or even another smaller network operator. The motivation is that laying optical fibers (particularly for long distances) is expensive. When the primary network operator is not using the entire spectrum for their own purposes, they can lease a portion of that spectrum to others.

With the shared spectrum concept, the customer can use the spectrum as they please. They can provision multiple wavelengths, or even one or more multi-carrier super channels. However, this has the potential to disrupt overall system integrity when the details of these wavelengths are not visible to the primary network operator.

For example, assume the customers leases 200GHz of spectrum, and informs the operator this will be used for four wavelengths spaced 50 GHz apart, each with 0dBM (1mW) power. All perfectly reasonable. The operator in turn sets the line system to maintain 6dBM (4mW) of power for that 200GHz band. Then, for whatever reason, the customer launches only a single wavelength. Without knowledge of what the spectrum sharing customer is actually doing, this single “rogue” wavelength will become over-amplified by the system to 6dBM, and can invoke non-linearities including cross-phase modulation in other parts of the spectrum. Not good.

What is required are mechanisms whereby the optical network operator can know what wavelengths with what power the customer is actually launching into their shared (leased) spectrum.

It is still early days for shared spectrum for terrestrial networks, and we are far from an industry consensus on implementation and management mechanisms. (There is some history of spectrum sharing in submarine networks, but this operates on different principles of maintaining fixed total power for the whole fiber, which does not map neatly to the more flexible terrestrial world.)

At Ribbon, we are developing an approach that uses customer network management (CNM). The idea is to transform wavelengths launched by the customer on their shared spectrum, into well-understood, alien wavelengths (see below). 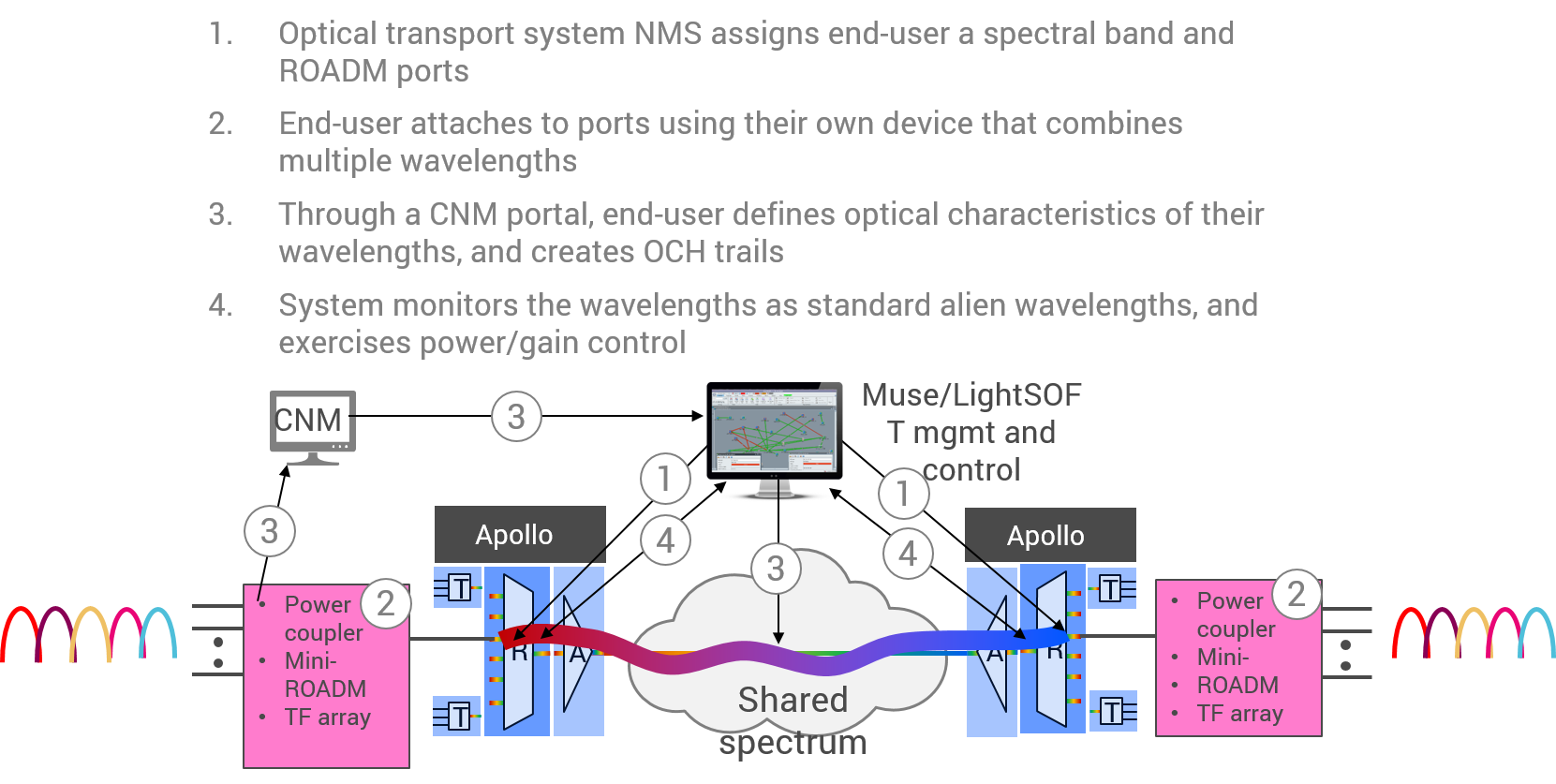 This approach provides the end-customer leasing the shared spectrum with powerful capabilities. They can only launch a few wavelengths on day one, and then launch more over time as their needs grow, up to the limit of their leased spectrum. Moreover, the end-customer has access to leased spectrum throughout the host operator’s optical network, not just on point-to-point links. Using their CNM window, they can provision wavelengths dynamically between endpoints to meet shifting needs, such as adding wavelengths on a temporary basis for data center backups. Through the CNM window, customers can also continuously monitor the performance of their wavelengths.

The benefit to the host network operator is that they gain complete visibility of the wavelengths launched on the shared spectrum. They can use the OLS controls to manage the power of these wavelengths as standard alien wavelengths, and eliminate concerns of disrupting other wavelengths on the system. The host operator can achieve full separation of shared spectrum for multiple customers, so each customer can use their spectrum as they please, without concern they will affect, or be affected, by anyone else.

Indeed, shared spectrum is the next step in opening up optical networks as a multi-user platform.