Synchronous Digital Hierarchy, it died years ago, didn’t it? No. This is not an attempt to resurrect a retired technology, more a review of what SDH did for us (and in some cases is still doing).

There was also a need to save hardware, integrate management and recognise the importance of timing. Application Specific Integrated Circuits (ASICs) offered a technical option which SDH (and SONET) took complete advantage of.

The Triumph of SDH

SDH (and SONET) were standardised towards the end of the 1980s. 1990 onwards saw the rapid development of equipment and capability. SDH added overheads to the services allowing them to be monitored, it included protection mechanisms for the services: hop by hop and end to end. SDH provided paths for network management and included resilient management of timing distribution.

One of the key hardware elements of SDH was the add-drop multiplexer, able to efficiently extract, from a high-speed signal, a low-speed service. The sub 50msec protection switching of SDH still ‘haunts’ transmission systems.

SDH was not designed to carry Ethernet. Next Generation SDH arrived at the turn of the century.

Together these three standards facilitated the standardised mapping of Ethernet (and other data formats) into SDH. 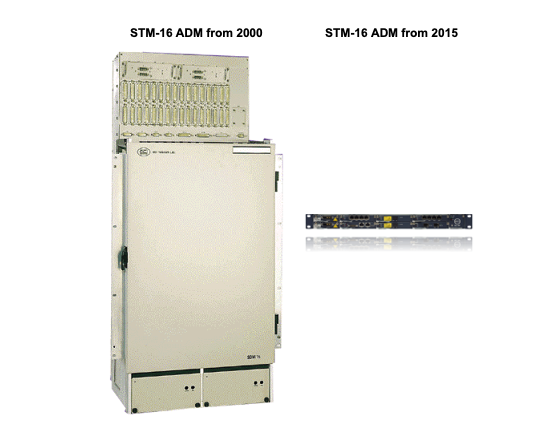 The Demise of SDH

SDH rates peaked at 10Gbit/s (STM-64), faster speeds were possible but the largest container (C-4 at 150Mbit/s) began to be too small for core networks. At the same time the much larger data industry decided it would be better (cheaper and more efficient) to transport Ethernet as Ethernet rather than mapping it into SDH.

Initially, this was a disaster because LAN Ethernet did not have the mechanisms for WAN deployment. Once carrier-class Ethernet standards emerged (adding operations, administration, maintenance (OAM) and timing) to Ethernet the deployment of SDH declined.

Where Is SDH Now

Like all legacy (profitable) technologies SDH continues to be used in many networks delivering reliable managed transport, investment is low in SDH for networks and close to zero in SDH equipment. However, there are still replacements, maintenance and occasionally new deployments.

SDH maintenance is driven by users with traditional interfaces on expensive equipment where changing the interface is not an option. Or by users familiar with SDH but unable, and often not needing to, invest in the cost of a new network.

However it is harder and harder to get the basic SDH parts and, in just a few years, new SDH equipment is unlikely to be available.

What to Do If You Still Use SDH?

There are several options:

Find out more about our MPLS services for your SDH

Where Are We Now

SDH is still beloved (certainly by those of us whose career grew in parallel) and responsible for much of critical infrastructure communications. It will continue to fade but, like all transmission technologies, be around for decades to come.

Packets are here to stay and can do everything any operator needs.

Ribbon recognises each user of a transport network has unique needs. Within our Neptune family, we can mix and match support of SDH, Ethernet and MPLS-TP services. Or we have pure packet switches with Ethernet, MPLS-TP, IP/MPLS and segment routing. Circuit emulation for sub E1 to STM-4 is supported. We offer all these options to ensure the migration from TDM to packet is as smooth as possible and takes place at the time and pace you want.

One lesson I take from the success and then decline of SDH is it was probably too good, like tarmac on the road, you only notice it when it’s broken, and SDH rarely broke.