Where Does OTN Fit in an All-IP Network?

Orange Plans to Transition to an All-IP Network

Those familiar with France’s Orange and their stated goal to transition to an all-IP network by 2020 might be confused by statements at the Next Generation Optical event in Nice in June about their trials of OTN technology. After all, how can an “all IP” network include OTN? In actuality, OTN can be a very important part of an all IP network, depending on how “all IP” is defined.

Depending on how deep you want to go into the technology, there can never be a truly “all IP” network with other technologies excluded. IP is a Layer 3 technology, so by definition there must be protocols operating at the other layers – be they Ethernet at Layer 2, MPLS or MPLS-TP at layer 2.5, WDM at layer 0, or OTN at layer 1. Purists may say that “all IP” means IP over Ethernet over wavelengths in all cases, but others with practical networks would disagree. 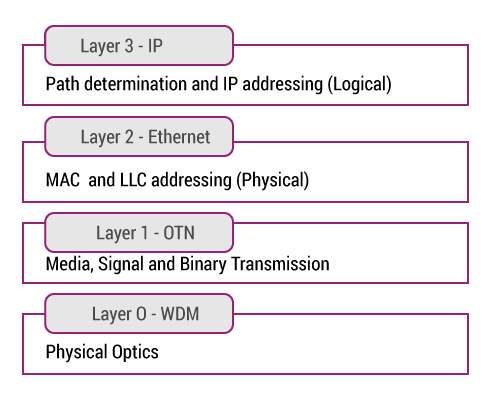 A “pure all IP network” defined as IP/Ethernet/optics works well for smaller networks or networks with only best-effort data traffic. The problem with a network where all traffic is routed at the IP layer is that IP is by its nature non-deterministic. That means that at any point in time the traffic may be taking a different route than it did at any other point in time. The intelligence of the network determines the optimal path for each packet based on routing tables.

However, a “pure all IP network” does a poor job with traffic that is deployed with service level agreements (SLAs) that dictate delay, reliability, recovery times, etc. since the traffic can change routes. What is needed for those types of traffic is a deterministic technology underpinning the packet technology. OTN is one such technology.

By deploying an OTN base below an all IP network, service providers like Orange who have a large installed base of legacy technologies can more easily and quickly migrate to a modern network design. Legacy TDM traffic can either be adapted directly into OTN via wrapping or legacy TDM can be converted to packet via circuit emulation and then run over dedicated OTN links between primary sites. OTN enables the optical layer to be used more efficiently without requiring that all traffic of all types from all customers be combined into a common pool of routing tables and control protocols.

While the resulting network may not meet the strict definition of purists, the reality is that from a Layer 3 perspective, the network is indeed running only the IP protocol. The OTN layer underneath provides another layer of flexibility, efficiency, and programmability above pure optics while adding deterministic features where they are needed.