For over 50 years, toll free numbers have been exceptionally successful.  Toll free numbers enable businesses and institutions to support branding initiatives, facilitate marketing campaigns, promote a national presence, and to simply make it convenient for people to reach them without regard for cost.

On the upside, the incentives for arbitrage that unnecessarily raised costs are now reduced.  Similarly the incentive that encouraged bad actors to generate high-volume robocalls for toll free traffic pumping is greatly reduced. And maybe most importantly, these are critical steps to protect 8YY customers who have been unnecessarily burdened by high costs and fraudulent 8YY calls that they had to pay for.

On the downside, for carriers, the impact of this ruling is a significant shift of the burden to support 8YY calls.  The old pricing model created an incentive for originating operators to leave TDM transport, tandem switching, and even extra route miles in the call path.  The new model reflects the modern reality of tandem-less networks and efficient IP transport.  All carriers involved in handling 8YY calls are now caught in squeeze of having to cover their own costs under the bill-and-keep model as well as having limits on how much they can recoup for handling 8YY calls.  Carriers need new methods to restore profitability.

The two most significant ways to reduce costs, thus preserving margins on handling toll free calls, is for the originating carrier to:

With the PSX, the originating carrier can use a REST/HTTPS API-based query, rather than a more expensive SS7-based query to determine the proper routing.  By using an API-based query and response it is possible to get the RespOrg ID, Carrier ID Code (CIC), Destination IP, and the FQDN for the RespOrg.  Not only is this query less costly, but it delivers enough information to determine if direct routing to the RespOrg will be possible.

For carriers with many switches performing toll free number routing queries, the PSX provides a way to aggregate all those queries, reducing the complexity and cost vs using SS7-based queries. 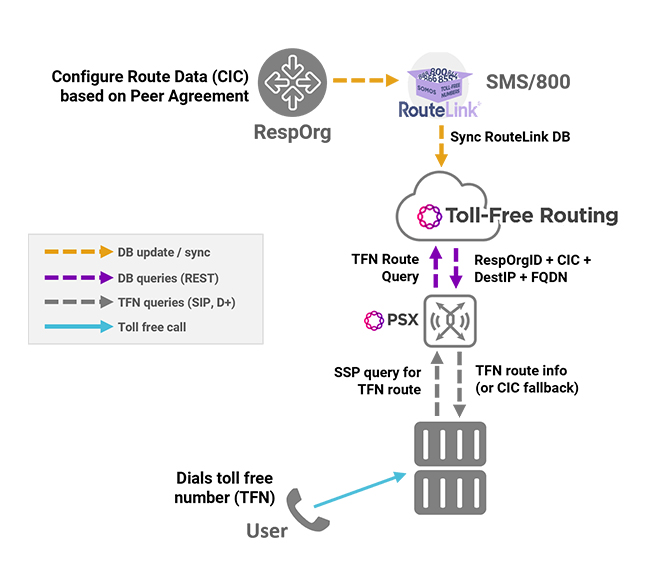 With Toll-Free Routing service, an originating service provider can move from an expensive, and limited, SS7 query to an IP-based query as shown in the image above.  With RespOrg ID, the CIC, Destination IP address and the Fully Qualified Domain Name (FQDN) of the RespOrg, Ribbon's PSX will identify the lowest cost route to reach the proper RespOrg.

Ideally, the lowest cost route will be a direct route to the RespOrg, shown in the image below as a solid blue line.  As can also be seen, the solid green line, represents the compensation flow that is direct to the originating service provider, thus helping maintain margins on this traffic.

If direct routing to a RespOrg is not possible the CIC, also returned in the toll free database response, will be used to reach next carrier, as is done today. Note: This call flow and the associated compensation flow are shown using the dashed blue and green lines.